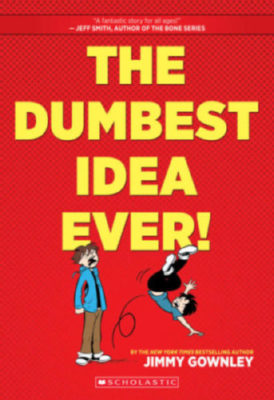 The Dumbest Idea Ever!

What if the dumbest idea ever turned your life upside down?

At thirteen, Jimmy was popular, at the top of his class, and the leading scorer on his basketball team. But all that changed when chicken pox forced him to miss the championship game. Things went from bad to worse when he got pneumonia and missed even more school. Before Jimmy knew it, his grades were sinking and nothing seemed to be going right.

How did Jimmy turn things around, get back on top at school, and land a date with the cutest girl in class?

Renowned comics creator Jimmy Gownley shares his adventures as he grows from an eager-to-please boy into a teenage comic book artist. This is the real-life story of how the DUMBEST idea ever became the BEST thing that ever happened to him.
Jimmy Gownley

Jimmy Gownley is an award-winning comics author who began writing and drawing comics at age 15. His acclaimed series, Amelia Rules!, was launched in 2001 to a flurry of rave reviews and became a New York Times bestseller. He has been nominated for multiple Eisner awards and his most recent book, The Dumbest Idea Ever!, won the Children’s Choice Award. He cofounded the organization Kids Love Comics, which works to promote comic books and graphic novels as a valuable tool for literacy. Jimmy lives in Harrisburg, Pennsylvania.