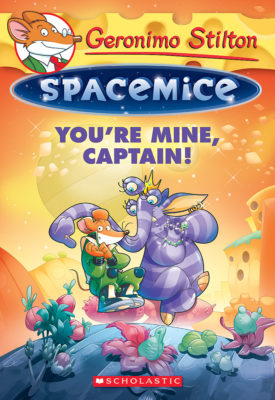 Geronimo Stilton Spacemice #2: You're Mine, Captain!

Meet Geronimo Stiltonix:
He is a spacemouse -- the Geronimo Stilton of a parallel universe! He is captain of the spaceship MouseStar 1. While flying through the cosmos he visits distant planets and meets crazy aliens. His adventures are out of this world!

YOU'RE MINE, CAPTAIN!
The MouseStar 1 is contacted by strange aliens whose ship has broken down! Geronimo Stiltonix is happy to help them out, and even accompanies them to their home planet Flurkon. But during his visit, the alien queen becomes enchanted by Geronimo -- and wants to marry him! Will he be forced to stay on Flurkon forever?
Geronimo Stilton