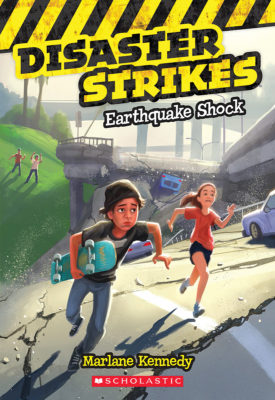 It had seemed like the perfect California day. But as Joey Flores walked home from the skate park with his friends, the ground began to tremble, and Joey knew they were headed for trouble....

The earthquake that followed devastated their neighborhood, collapsing a nearby overpass with Joey and Fiona on one side and Kevin and Dylan on the other. Now Joey and his friends must rescue each other, endure the aftershocks, and find a new way home as the earth cracks beneath their feet.
Marlane Kennedy

Marlane Kennedy is the author of ME AND THE PUMPKIN QUEEN and THE DOG DAYS OF CHARLOTTE HAYES. She has lived through one tiny earthquake, the blizzard of 1978, and a tornado that swept through Wooster, Ohio, where she lives with her husband and daughter. Though she is having a blast writing about disasters, she is hoping not to add any more to this list! You can find her online at www.marlanekennedy.com.

\tAll at once, Joey heard an earsplitting boom. A jolt knocked him forward and he stumbled off his board. He looked over at Fiona. She was still on her board, but she looked as if she'd felt the jolt, too. Had a car run into the wall behind them? As he turned to look, the sidewalk shifted under his feet. He tried to keep his balance, but the sidewalk began to roll like a fun-house floor. Joey heard an awful rumbling and the sound of cracking concrete, and suddenly he knew exactly what was happening.
\tIt was an earthquake. Joey had lived through several minor ones, but this one felt different. They had to get out from underneath the highway.
\tFiona had jumped off her board now, but she stood paralyzed. Joey grabbed her arm, yanking her. \"You have to run,\" he shouted. \"Now!\"
\tHer voice trembled. \"I d-don't know if I c-can.\"
\t\"You have to!\" Joey shouted as he dragged her forward.
\tBut it was near impossible to run with the ground rising and falling every which way. They both fell several times and had to keep dragging each other back up as small chunks of concrete and dust rained down from above.
\tThe sun, oblivious to the earthquake, was cheerfully beating down only a few feet away. \"Just a few more feet,\" Joey screamed at Fiona. They lurched forward, holding hands. Crashing concrete columns chased them, like some awful monster ready to swallow them whole. \"Ow!\" Something hard and heavy slammed into Joey's shoulder. But they couldn't afford to stop moving."