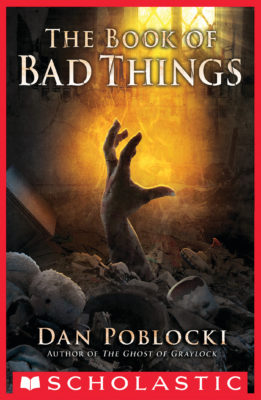 The Book of Bad Things

When Cassidy Bean leaves New York to spend the summer upstate, she's disappointed to find that Whitechapel is not the quiet, pleasant suburb she remembers. Ursula Chambers, the strange old hermit at the end of the cul-de-sac, has passed away under mysterious circumstances. And the townspeople are shocked to discover that Ursula was a hoarder: Her farmhouse is teeming with stacks of newspapers, piles of furniture, mounds of antique dolls and taxidermy animals.

Cassidy watches as the people of Whitechapel descend upon Ursula's farmhouse, claiming her abandoned treasures for their own. She listens as rumors spread that Ursula's vengeful ghost is stalking the town with a warning from beyond the grave. And when Cassidy resolves to uncover the truth behind the strangeness, she learns there are more bad things in the world than she ever suspected. . . .

Modern master of the macabre Dan Poblocki is back with another scary story best read at night.
Dan Poblocki

Dan Poblocki is the author of The Stone Child, The Nightmarys, The Ghost of Graylock, The Haunting of Gabriel Ashe, The Book of Bad Things, and the Mysterious Four series. He lives in New York with two adorable cats and more books than he has room for. Visit him at danpoblocki.com.

Cassidy glanced up the street, remembering the Dumpsters that had sat there until yesterday. "Did your friends say anything about Ursula's house? Did they take anything from her driveway when the crew was cleaning up?"

Deb sipped her coffee, staring into Cassidy's eyes, squinting with concern. "Yeah, as a matter of fact. Also said Ursula showed up in the middle of the night, telling them to put it back." She chuckled. "They're all having some sort of mass hallucination. It would seem so ridiculous to me, except for the fact that Mrs. Moriarty really died."

Cassidy shivered. Was it that cold out here? "You're going to the greenhouse today?"

"Can you do something for me?"

"Tell your friends who've seen Ursula, the ones you work with, to put it back."

Cassidy glanced toward the flashing lights that were still parked down the hill. Fingers of ice ran along her spine, and this time she knew it wasn't the breeze. "Tell them to put back whatever they took from her."