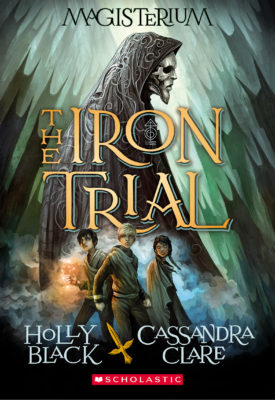 The Iron Trial (Magisterium #1) : Book One of Magisterium

Most kids would do anything to pass the Iron Trial.

Not Callum Hunt. He wants to fail.

All his life, Call has been warned by his father to stay away from magic. If he succeeds at the Iron Trial and is admitted into the Magisterium, he is sure it can only mean bad things for him.

So he tries his best to do his worst -- and fails at failing.

Now the Magisterium awaits him. It's a place that's both sensational and sinister, with dark ties to his past and a twisty path to his future.

The Iron Trial is just the beginning, for the biggest test is still to come . . .

From the remarkable imaginations of bestselling authors Holly Black and Cassandra Clare comes a heart-stopping, mind-blowing, pulse-pounding plunge into the magical unknown.

Cassandra Clare is the author of City of Bones, the first book in The Mortal Instruments trilogy and a New York Times bestseller. Her The Infernal Devices series has spawned three #1 bestsellers. With Holly Black she is the author of the Magisterium series, a New York Times bestseller. Born overseas, Cassandra spent her early years traveling around the world with her family and several trunks of books. She lives in Massachusetts.

His fingers grazed her cold cheek.

A cry made him whip around. In this cave full of death and silence, a cry.

He turned, searching frantically for the source of the thready wail. It seemed to be coming from closer to the cave entrance. He plunged back the way he had come, stumbling over bodies, some frozen stiff as statues — until suddenly another familiar face stared up at him from the carnage.

Declan. Sarah''s brother, wounded in the last battle. He appeared to have been choked to death by a particularly cruel use of air magic' - ! ' his face was blue, his eyes shot with broken blood vessels. One of
his arms was outflung, and just underneath it, protected from the icy cave floor by a woven blanket, was Alastair''s infant son. As he stared in amazement, the boy opened his mouth and gave another thin,
mewling cry.

As if in trance, shaking with relief, Alistair bent and lifted his child. The boy looked up at him with wide gray eyes and opened his mouth to scream again. As the blanket fell aside, Alastair could see why. The baby''s left leg hung at a terrible angle, like a snapped tree branch.

Alastair tried to call up earth magic to heal the boy, but only had enough power left to take away some of the pain. Heart racing, he rewrapped his son tightly in the blanket and wound his way back through the cave to where Sarah lay. Holding the baby as if she could see him, he knelt down beside her body.

"Sarah," he whispered, tears thick in his throat. "I''ll tell him how you died protecting him. I will raise him to remember how brave you were."

Her eyes stared at him, blank and pale. He held the child more closely to his side and reached to take Semiramis from her hand. As he did, he saw that the ice near the blade was strangely marked, as if she had clawed at it while dying. But the marks were too deliberate for that. As he bent closer, he realized that they were words — words his wife had carved into the cave ice with the last of her dying strength. As he read them, he felt them like three hard blows to the stomach.