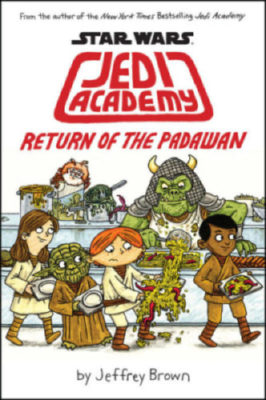 After surviving his first year at Jedi Academy, Roan Novachez thought his second year would be a breeze. He couldn't have been more wrong. Roan feels like he's drifting apart from his friends, and it's only made worse when Roan discovers he's not the amazing pilot he thought he'd be. When the school bullies take him under their wing, he decides they aren't so bad after all--or are they?

This year, Roan will have to face alien poetry tests, menacing robots, food fights, flight simulation class, online bullies, more lightsaber duels, and worst of all . . . a girl who is mad at him.

This incredible, original story captures all of the humor, awkwardness, fun, and frustrations of middle school--all told through one boy's comics, journal entries, letters, sketches, e-mails, and more.
Jeffrey Brown

Jeffrey Brown is an Eisner Award winner and the New York Times bestselling author-illustrator of Darth Vader and Son, and Vader's Little Princess, both imagining what it would have been like if Darth Vader had raised a young Luke and Leia. Jeffrey has created dozens of graphic memoirs, humorous parodies, and cat books. He lives in Chicago with his wife, Jennifer, and his two sons.