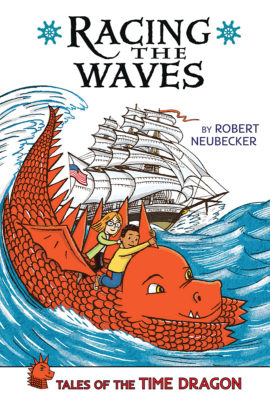 Tales of the Time Dragon #2: Racing the Waves - Library Edition

"Call me First Mate Red! You're aboard our clipper ship, the Flying Cloud!"

Joe and Lilly are heading back in time for another adventure with Red the Time Dragon. This time they're traveling on a famed clipper ship as it tries to break a world record for speed. Navigator Eleanor Creesy will guide them from New York City around the tip of South America and back up to San Francisco to deliver the ship's cargo to gold miners and settlers. Along the way, they'll meet plenty of strange sailors, one of the first female navigators, and sail through very rough waters. Will the ship make it? And will they break the world record? Only Red knows for sure!

This easy reader features special extras like maps, time lines, glossaries, and super facts that take you beyond the story and bring history to life!
Robert Neubecker

Robert Neubecker has written and illustrated more than twenty books for children and illustrated for countless periodicals. He grew up in Oshkosh, Wisconsin with lots of cows but moved to New York City at the age of nineteen. There he studied illustration and painting, and got his B.F.A. from Parson's School of Design. He has done work for The New York Times, Time, Newsweek, The Wall Street Journal and Slate.com, to name just a few. Robert won an ALA notable award for his book,Wow! City! He has received numerous awards for his illustrations, including a silver medal from the Society of Illustrators and a Key Art Award for Best Comedy Poster for the movie Sideways. Robert lives in the Wasatch Mountains of Utah with his wife, two kids, and two very big dogs.