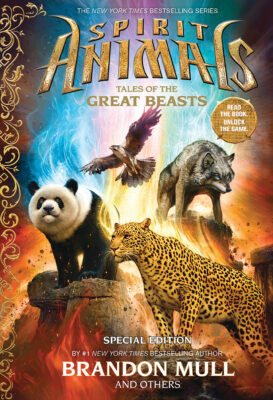 Briggan the Wolf, Uraza the Leopard, Jhi the Panda, and Essix the Falcon -- the Four Fallen. Long before they were spirit animals, they roamed the wilds as Great Beasts, the most powerful beings in Erdas. When a mad king arose, the four banded together with an army of humans and animals to defeat him.

But they weren't the only Great Beasts in the war. A deadly scheme was already underway, hatched by two of their own. To save their world, the four had to give up their lives.

These are the lost stories of the most selfless acts of bravery that Erdas has ever seen, and the secret betrayal that started it all. These are TALES OF THE GREAT BEASTS.

Gavin Brown has written stories and designed games for the bestselling Spirit Animals and The 39 Clues series, and is the creator of the highly rated iOS and Android game Blindscape. He lives in a narrow apartment in New York City's East Village.

Billy Merrell is the author of Talking in the Dark, a poetry memoir published when he was twenty-one, and is the co-editor (with David Levithan) of The Full Spectrum: A New Generation of Writing About Gay, Lesbian, Bisexual, Transgender, Questioning, and Other Identities, which received a Lambda Literary Award. Merrell is also a contributor to the New York Times-bestselling series Spirit Animals, and has published fiction, poetry, and translations in various journals and anthologies. Born in 1982, he grew up in Jacksonville, Florida, and received his MFA in Poetry from Columbia University. He now lives in Brooklyn, New York, with his husband, author Nico Medina.