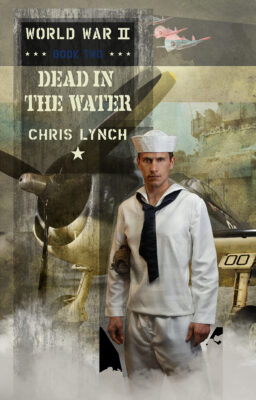 Critically acclaimed author Chris Lynch provides an action-oriented but thoughtful view of the US Navy's war in the Pacific.

Hank and Theo are brothers who share everything, including a sense of duty a love of baseball. They have been inseparable for their entire lives. But when America is drawn into World War II, the young brothers find themselves fighting the same war on opposite sides of the globe.

As an airedale in the Navy, Hank now lives aboard an aircraft carrier, the USS Yorktown. His job is to assist the pilots who soar off each day to engage Japanese forces in the Pacific Ocean. It is a crucial and terrifying duty in the wake of the attack on Pearl Harbor.

As the days at sea become weeks and months, Hank adapts to life apart from his family. He even adapts to the fear of torpedoes. But in an era of prejudice and segregation, it's Hank's choice of friends that might prove most dangerous of all.
Chris Lynch

This is a formal and solemn occasion. Everyone on board Yorktown is dressed in whites, and everyone not essential to the navigation of the ship is lined up at the rail on the flight deck. I''m embedded like an imposter among the fly guys who have become my friends. As we approach the island of Oahu and then drift along into the channel to Pearl Harbor, we see the people lined up on the beaches to cheer us. And cheer us they do, robustly, like we have already won some big important something, rather than just gotten started. I have heard, and felt, crowds cheering before, and I have been on the receiving end of those cheers in baseball parks all around the Delmarva Peninsula. But it would be shameful, wrong, and altogether misleading to claim that the experience approached this one in any meaningful way.

Baseball is important. Baseball, in a way I truly believe, is exactly what we are here fighting for. And yet, at the same time, this is the first time anything ever made me feel like baseball was . . . small.'