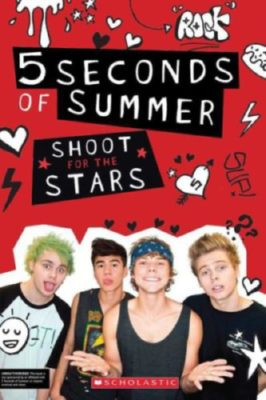 5 Seconds of Summer: Shoot for the Stars

Move over, One Direction--there's a new boy band in town! And this time, they're from Down Under. 5 Seconds of Summer is the hot new boy band from Australia, and they are taking the world by storm. They were voted MTV's Breakthrough Band of the Year, and have been nominated for Best Music Group at the Teen Choice Awards. Plus, 5 Seconds of Summer is touring with One Direction, and is dropping their first album this summer! Learn all about Luke, Michael, Calum, and Ashton in this awesome new biography with lots of photos.
Mandy Archer

Writer Stephanie Clarkson lives in leafy Surrey, England, with her husband, two young daughters, and a very hairy hound named Bob. Her ambition in life is to invent and patent an anti-mud device for dogs like Bob, who like hanging out in dirty puddles.Steph began her writing career as a journalist at Britain's Daily Mail newspaper, and she continues to write for the British press while dreaming up stories for children about strong-minded princesses and tech-obsessed owls.