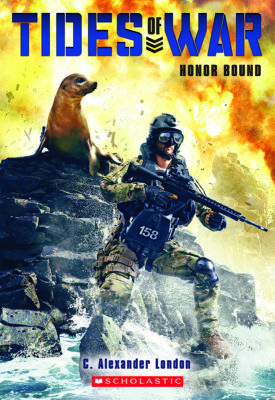 An action-packed, maritime military adventure from the author of Dog Tags.

A notorious Somalian pirate sails the Arabian Sea, leading a band of deadly thieves and mercenaries on an international crime spree. When they take American hostages aboard a cargo ship, they've finally gone too far -- and a special task force of Navy SEALs and Marines is called in to help. SEALs, Marines . . . and a talented sea lion named Sly.

As Sly's handler, young sailor Felix has two important jobs. Job one is to get Sly to plant a beacon so that the U.S. strike force can follow the pirates back to their haven. Job two is to keep the sea lion safe and out of combat. But when the mission goes wrong and the pirates get the upper hand, Felix and Sly end up right in the middle of the action . . . with dozens of innocent lives at stake.
C. Alexander London

Sly had been searching underwater for a while now. He''d popped his head up only once to take a breath, then disappeared again, and Felix had started to wonder what he was doing down there. Hunting for fish? Goofing off?

Having a sea lion for a partner wasn''t the easiest thing in the world. Felix couldn''t exactly explain to Sly that today''s training exercise was especially important. That Special Forces operators and their commanders had come from as far away as Washington DC to watch. They were trying to decide the future of the Navy''s Marine Mammal Program. They were trying to decide what to do with sea lions like Sly and sea lion handlers like Felix.

Sly was an experienced search-and-recovery sea lion - one of only thirty-five sea lions in the Marine Mammal Program - but he was still an animal. Some days, Sly liked to let out his wild side, even when the bosses were watching and even when a highly trained Navy diver, who was pretending to be an underwater intruder, was doing his best not to let Sly catch him.

"You think he''s taking so long because he knows your job is on the line?" Gutierrez asked. "Or does he just like the drama?"