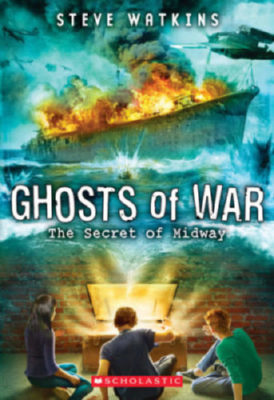 The Secret of Midway (Ghosts of War #1)

In the basement of his family's junk shop, Anderson and his friends Greg and Julie discover a trunk full of old military stuff, including a battered navy peacoat from World War II with a mysterious letter in the pocket. Curious, Anderson takes both home. Only that's not all he brings home . . .

Later that night, the owner of the coat and letter appears in Anderson's room - the ghost of a World War II sailor.

But who is the ghost and why hasn't he crossed over? And what does he want with Anderson?

Soon Anderson, Julie, and Greg are wrapped up in a mystery that's over seventy years old. Can the friends figure out what happened to the ghost before it's too late?
Steve Watkins

Steve Watkins is the author of the novels On Blood Road;Juvie; What Comes After; Great Falls; Sink or Swim; Down Sand Mountain, winner of the Golden Kite Award; and the Ghosts of War series, including The Secret of Midway, Lost at Khe Sanh, AWOL in North Africa, and Fallen in Fredericksburg.

A former professor of journalism, creative writing, and Vietnam War literature, Steve now runs a nonprofit yoga studio and works with an urban reforestation organization in his hometown of Fredericksburg, Virginia.