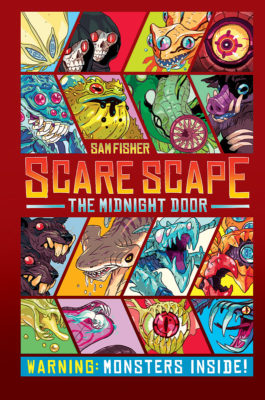 Return to Dimvale, the darkest town in America, in the sequel to the "imaginative, not-too-dark urban fantasy" (Kirkus Reviews) with "high appeal for kids . . . who are fascinated with the creepy and the weird" (Bulletin of the Center for Children's Books).

When the town is overrun with two-headed mutant rats, Morton Clay knows that magic is to blame. And when his classmates get their hands on impossible gadgets like X-ray specs and anti-gravity lasers, he realizes the trouble is just beginning.

Morton and his siblings, James and Melissa, are the only ones who can stop the chaos. But should they, if it means eliminating magic from the world? As Morton begins to fight magic with magic, he's not so sure. . . .

Sam Fisher worked as a scenic carpenter on movie sets before quitting his day job to become a writer and teacher. A native of England, Sam now lives with his wife and children in Canada, where he teaches screenwriting and film production at NSCAD University. SCARE SCAPE is his first novel.

Morton awoke with an odd nervous sensation, almost as if he were falling. It was the same feeling he got before going to the dentist or when standing in line for a particularly scary roller coaster. But of course, today he wasn't going to do either of those things. With a twinge of regret Morton realized that he was feeling nervous because today was Halloween.

Not so long ago he'd thought of Halloween as the most thrilling day of the year, better than birthdays, better even than Christmas. For him Halloween had always felt, quite literally, like a magical time. But unfortunately his feelings about magic had changed. Magic, he'd learned from experience, was a bit like the Kamikaze Cobra. You had to treat it very, very carefully, or it might blow up in your face.