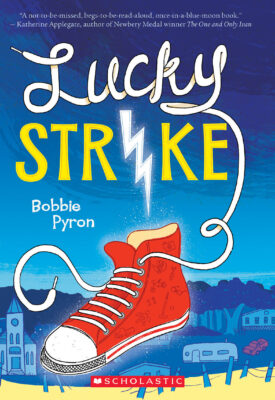 Nate Harlow would love to be lucky, just once!

He'd like to win a prize, get picked first, call a coin toss right, even! But his best friend, Genesis Beam (aka Gen), believes in science and logic, and she doesn't think for one second that there's such a thing as luck, good or bad. She doesn't care what names the other kids call them. She cares about being right, about saving the turtles of Paradise Beach, and she cares about Nate.

Then, on his birthday, at the Goofy Golf mini-golf course, Nate is struck by lightning -- and survives! Suddenly baseballs are drawn to his bat -- popular kids want HIM on their side. It seems the whole town of Paradise Beach thinks Nate has the magic touch.

But is there room for Gen in Nate's lucky new world?

Lucky Strike tells the unforgettable story of two vulnerable outsiders and what luck is really all about.
Bobbie Pyron

Bobbie Pyron is the author of The Dogs of Winter, which received three starred reviews and was named a Kirkus Reviews Best Children's Book of the Year. She grew up in Florida, now lives in Park City, Utah, and works as a librarian in Salt Lake City.

--- - He closed his eyes and rubbed his thumb on the little rabbit foot. Please, please let something lucky happen today. Everyone watched wide-eyed as Nate unleashed a long, strong breath. Carried on that breath was 1) the wish that he'd have good luck just once in his life and 2) the knowledge that not only had his birthday wishes never come true, but the candles' flames had never gone out, no matter how hard he blew.

But this time, on Nate Harlow's eleventh birthday on the eleventh of April, a wavy line of smoke replaced the dancing candle flame.