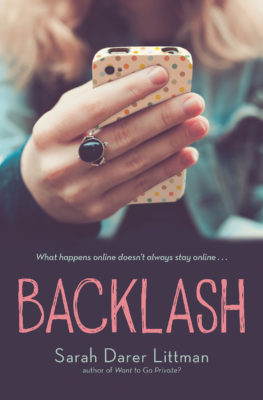 Lara just got told off on Facebook.
She thought that Christian liked her, that he was finally going to ask her to his school's homecoming dance. It's been a long time since Lara's felt this bad, this depressed. She's worked really hard since starting high school to be happy and make new friends.
Bree used to be BBFs with overweight, depressed Lara in middle school, but constantly listening to Lara's problems got to be too much. Bree's secretly glad that Christian's pointed out Lara's flaws to the world. Lara's not nearly as great as everyone thinks.
After weeks of talking online, Lara thought she knew Christian, so what's with this sudden change? And where does he get off saying horrible things on her wall? Even worse - are they true?
But no one realized just how far Christian's harsh comments would push Lara. Not even Bree.
As online life collides with real life, the truth starts to come together and the backlash is even more devastating than anyone could have imagined.

Sarah Darer Littman is the critically acclaimed author of Backlash; Want to Go Private?; Anything But Okay; In Case You Missed It; Life, After; and Purge. She is also an award-winning news columnist and teaches writing at Western Connecticut State University and with the Yale Writers' Conference. Sarah lives in Connecticut with her family, in a house that never seems to have enough bookshelves. You can visit her online at sarahdarerlittman.com.