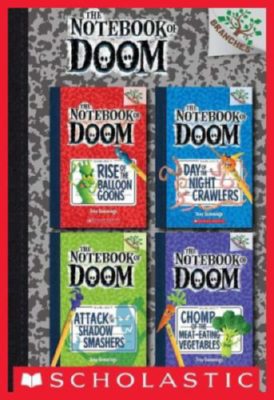 The Notebook of Doom Collection: Books 1-4

Alexander has just moved to a new town -- a town that is filled with all sorts of monsters! He finds an old notebook with the word "DOOM" inscribed on the front cover. The Notebook of Doom, which Alexander now holds, contains top secret information about monsters! In the first book, Alexander goes up against balloon goons -- twisted arm-waving balloon guys! He battles fish monsters in book #2, shadow smashers in book #3, and meat-eating vegetable monsters in book #4. This series is full of humor, engaging black-and-white illlustrations, and of course . . . monsters!
Troy Cummings