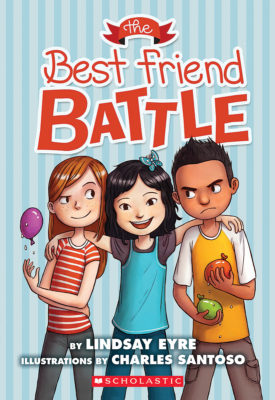 Sylvie Scruggs doesn't like Georgie Diaz. He always calls her Scruggs. He always beats her in baseball. He didn't invite her to his party. Plus, he's a boy.

Now Georgie is trying to steal Sylvie's best friend, Miranda Tan. He's giving Miranda a super-special birthday present, so Sylvie will too -- only her present will be ten times better. With the help of her twin brothers, a ferret, a castle, and some glitter glue, Sylvie sets out to make Miranda remember who her REAL best friend is, and forget about Georgie forever.

"Two words: Sylvie Scruggs. Two more words: LOVE HER! Eyre nails it with this new kid on the block. (And here's a challenge: I dare you not to laugh out loud)." -- Barbara O'Connor, author of How To Steal A Dog and The Fantastic Secret of Owen Jester
Lindsay Eyre

Lindsay Eyre received an MFA in Creative Writing for Children and Young Adults from the Vermont College of Fine Arts. She now lives with her husband and their five children in the fine and sweaty city of Cary, North Carolina. Please visit her website at www.lindsayeyre.com and follow her on twitter at @lindsayeyre.

Charles Santoso is a concept artist and illustrator who loves to draw very little things in a very little journal. He resides in Sydney, Australia. Please visit his website at www.charlessantoso.com and follow him at @minitreehouse.

Miranda and I had been friends since we were babies. We ate our first food together. We were in the same preschool class when Joe Kramer peed all over the "Meet at the Circle" carpet. In first grade, we built a fort made of cardboard, sugar cubes, and peanut butter all by ourselves, and they put a picture of it in the news. Last year, when the other girls started writing “secret admirer” notes and chasing the boys on the playground, Miranda and I made a club called "The Club for People Who Want to Do Fun Things." And Miranda has come to every single one of my baseball games (except for seven).

She was the only friend I had.