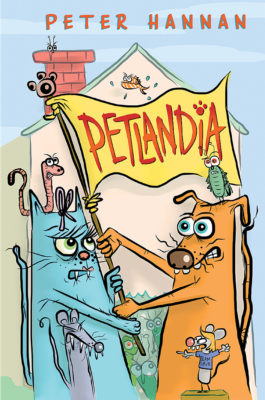 In Peter Hannan's delightfully absurd, illustrated chapter book PETLANDIA, a family of pets has kicked their snoring, sniveling humans to the curb, and declared the house an independent nation. But who will lead the new country of Petlandia?

Tricky feline (and dictator-wannabe) Mrs. Wigglesworth is expecting to be waited on like a queen. It's all foot rubs and ice cream sundaes from here on out! But doofy dog Grub and his lovesick sidekick Honeybaked Hamster want equal representation, and they have the masses on their side.

It's a dog-eat-dog world, and soon Petlandia has descended into all-out civil war!
Peter Hannan

Peter Hannan created the Nickelodeon animated series CatDog. He also wrote and sang the show's theme song. He is the author/illustrator of My Big Mouth: 10 Songs I Wrote That Almost Got Me Killed, the Super Goofballs series, Freddy, King of Flurb, The Greatest Snowman in the World, Escape From Camp Wannabarf, and The Adventures of a Huge Mouth. His work has appeared in magazines, newspapers, and galleries and been turned into everything from t-shirts to cheese crackers. He loves pets. He firmly believes that pets should rule the world. He lives in California.