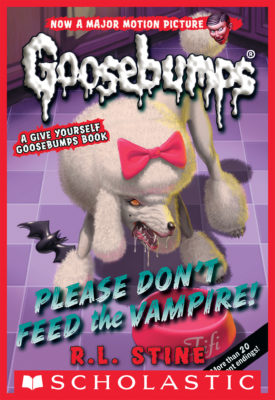 Classic Goosebumps #32: Please Don't Feed the Vampire! : A Give Yourself Goosebumps Book

You buy something called "Vampire in a Can." At first you think its just a goofy vampire costume with a cape, plastic fangs, and a tattoo of teeth marks. But then you find a packet in the bottom of the can labeled: DANGER-KEEP AWAY!

If you try to open the packet with your teeth, it rips in your mouth. Uh-oh. Looks like you've been transformed into a vampire-and you're really thirsty. If you decide not to open the packet, your dog sinks his teeth into it. Now your cute little poodle has become a ferocious vampire dog! Can you save your pooch before th bites off more than he can chew?

The choice is yours in this scary Goosebumps adventure that's packed with over 20 super spooky endings!