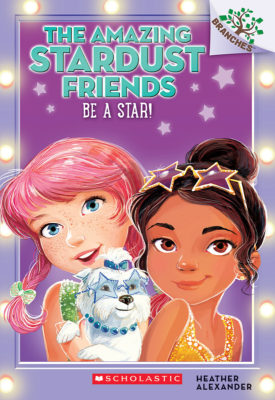 Be a Star!: A Branches Book (The Amazing Stardust Friends #2)

The Stardust Girls -- Marlo, Bella, Carly, and Allie -- are all abuzz! A film crew from Hollywood is doing a piece on the circus. Allie loves being in the circus, but she'd love to be a Hollywood star, too! She tries to impress the film crew by becoming the star of the show. But in the circus, everyone works together as a team. And Marlo, Bella, and Carly don't like how Allie is hogging the spotlight. Will Allie get her big Hollywood break?
Heather Alexander

Heather Alexander is the author of more than forty books for kids. The early chapter book series, THE AMAZING STARDUST FRIENDS, is her first original fiction series. She also spent many years as a children's book editor and worked on famous series including GOOSEBUMPS. She lives in New Jersey with her husband, two daughters, and a small white dog.

Diane Le Feyer has illustrated several French children's books. She has also worked as a character designer and storyboard artist in the TV, movie, and video game industries. Diane currently shares her time between France and Ireland.