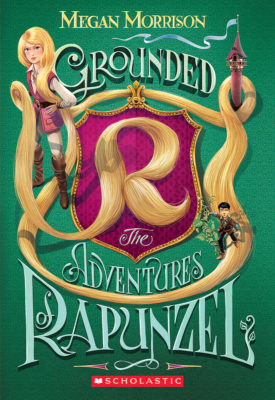 Grounded: The Adventures of Rapunzel (Tyme #1)

In all of Tyme, from the Redlands to the Grey, no one is as lucky as Rapunzel. She lives in a magic tower that obeys her every wish; she reads wonderful books starring herself as the heroine; her hair is the longest, most glorious thing in the world. And she knows this because Witch tells her so -- her beloved Witch, who protects her from evil princes, the dangerous ground under the tower, even unhappy thoughts. Rapunzel can't imagine any other life.

Then a thief named Jack climbs into her room to steal one of her enchanted roses. He's the first person Rapunzel's ever met who isn't completely charmed by her (well, the first person she's met at all, really), and he is infuriating -- especially when he hints that Witch isn't telling her the whole truth. Driven by anger at Jack and her own nameless fears, Rapunzel descends to the ground for the first time, and finds a world filled with more peril than Witch promised...and more beauty, wonder, and adventure than she could have dreamed.
Megan Morrison

Megan Morrison is a middle-school drama teacher and a writer. She cofounded the Harry Potter fanfiction site the Sugar Quill, and has been developing the world of Tyme since 2003. She lives near Seattle, Washington, with her family. Please visit her website at www.meganmorrison.net and her blog at makingtyme.blogspot.com, and follow her on Twitter at @megtyme.

He slipped down into the darkness. Moments later, his weight vanished from Rapunzel''s braid, and she lifted her head, her heart thumping.

"LIAR!" she screamed. Witch had warned her. Ground people were liars. Rapunzel should have guessed what Jack would do. Yet she had failed, and now the fairies would get their cure, and the powerful fairy would wake up again.

And Witch would die.

Panic seized Rapunzel. She clutched the railing and swung one leg over it, and then the other, until she was barely perched, by the toes of her slippers, on a tiny ledge of stone. She looked down and choked. The tower had never seemed so high. She could not think about what she was about to do. She couldn''t think or she would stop, and she couldn''t stop. Witch''s life depended on her.

She released the railing with one hand and grabbed the rope that Jack had left behind.'