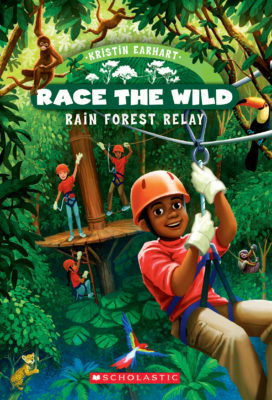 When Russell entered the race, he knew it was going to be a wild ride. Especially the first race course! He'd been studying up on the Amazon's animals and culture forever. But nothing could prepare him or his teammates for what they'd find in the rain forest: raging rapids, poisonous venom, and sneaky competitors who'd do anything to win.

Can the red team work together to make it to the finish line in one piece?

Each chapter in this action-packed adventure series is bursting with totally true facts about wild and wonderful creatures, dangerous habitats, maps, and more!
Kristin Earhart

Kristin Earhart grew up riding horses, pestering her cat, and reading books about amazing animals. These days, she lives with her husband and son in Brooklyn, New York, and writes books of her own. She still loves animals. But now, when she pesters her cat, the surly cat pesters back.

Russell saw the movement in the leaves. He grabbed Mari's hand and took off, trying to get as far from the jaguar cub as possible. He knew that the cub would be the mother's first concern.
\tRussell thought it was a good thing that the team had split up and gone in two different directions.
\t\"Meet at the boat!\" Sage's voice seemed to fade as she and Dev ran down the path. Russell and Mari forged deeper in the forest.
\tThey ran until they had to stop, Russell's shallow breath burning in the back of his throat.
\t\"I can't believe we saw a jaguar. They're incredibly endangered and very private animals.\" While Mari was marveling about their good fortune, Russell was thinking that their fortune was not so good at all. Looking around, he realized how foolish they had been. They had run without thinking, without noting landmarks.
\t\"I still hear something,\" Russell said. The rainforest was always full of sound, but this was the sound of a large group of animals: leaves rustling, twigs breaking. \"Come on,\" he said, grabbing Mari's hand again. He jogged, skirting fallen branches. He stopped. \"I still hear it.\" That's when he saw the tree. It's top branches opened like a giant green umbrella in the sky, nearly 200 feet high. But Russell was interested in the base. He pulled Mari toward it. Many leg-like roots sprouted from the trunk, making the tree look like a sea monster rising from the wet earth. Russell didn't care. He had seen a gap between the gnarled roots. Ducking down, he tried not to think of the hundreds of species that would call a dark hollow like this home. He pulled off his backpack and slid through the opening.
\tIt was dark, and the damp air smelled rich.
\t\"A good predator could sniff us out in here,\" Mari insisted.
\tRussell brought his finger to his lips. \"A good predator wouldn't break twigs,\" he whispered, \"telling us it was close.\"
\tHe knew Mari understood. He had thought it was the jaguar following them at first, too, but jaguars were too clever to be detected. Russell knelt down, hidden by the shadows, and listened. Beyond the soft scurrying and odd, dripping sounds under the tree, he could hear something else. There were voices, coming closer."