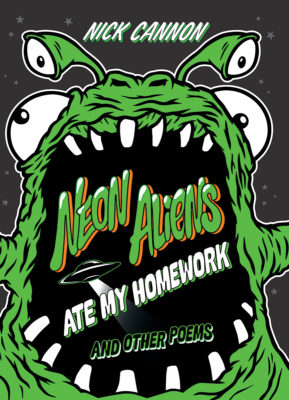 Neon Aliens Ate My Homework : And Other Poems

Nick Cannon---the unstoppable entertainer, comedian, actor, and musician---was inspired to write Neon Aliens Ate My Homework and Other Poems as a way to combine the worlds of poetry and hip-hop. These two mediums have shaped Nick into the prolific artist he is today. To further
pay respect to the urban storytelling that inspired him, each
funny, gross, wacky, or thought-provoking poem in this collection is illustrated by one of six incredible street artists who have shown his or her work around the world. There are even four illustrations by Nick himself.

Nick Cannon is a successful, multifaceted entertainer: film star, comedian, musician, writer, and executive producer of his very own hit TV shows. Cited by PEOPLE magazine as one of the top Ten most successful young people in Hollywood, Cannon is the host of AMERICA'S GOT TALENT. He has also hosted hit shows on MTV and Nickelodeon and oversees film and TV projects currently in development through his own multimedia company, NCredible Entertainment. Nick Cannon and Mariah Carey are the proud parents of Moroccan (Roc) and Monroe (Roe).