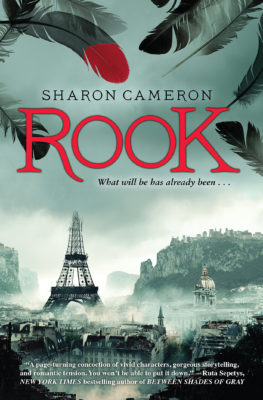 History has a way of repeating itself. In the Sunken City that was once Paris, all who oppose the new revolution are being put to the blade. Except for those who disappear from their prison cells, a red-tipped rook feather left in their place. Is the mysterious Red Rook a savior of the innocent or a criminal?

Meanwhile, across the sea in the Commonwealth, Sophia Bellamy's arranged marriage to the wealthy René Hasard is the last chance to save her family from ruin. But when the search for the Red Rook comes straight to her doorstep, Sophia discovers that her fiancé is not all he seems. Which is only fair, because neither is she.

As the Red Rook grows bolder and the stakes grow higher, Sophia and René find themselves locked in a tantalizing game of cat and mouse.

The heavy blade hung high above the prisoners, glinting against the stars, and then the Razor came down, a wedge of falling darkness cutting through the torchlight. One solid thump, and four more heads had been shaved from their bodies. The mob around the scaffold roared, a sudden deluge of cheers and mockery that broke like a wave against the viewing box, where the officials of the Sunken City watched from velvet chairs. The noise gushed on, over the stacks of headless bodies, around bare and booted feet that were crowded thick across the flagstones, pouring down the drains and into the deep tunnels beneath the prison yard like filth overflowing the street gutters. The city was bloodthirsty tonight.
Sophia dropped her gaze from the prison yard drains, where the din of the mob cascaded from high above her head, squinting into the gloom of the subterranean passage. The tunnel was one of dozens like it, long and narrow, a mausoleum of rough rock and stink and rows of heavy, locked doors. It was why they called it the Tombs. Sophia pulled the door to prison hole number 1139 shut behind her, letting the iron lock clank quietly back into place.
She had planned for five prisoners to be in hole 1139, not thirteen, and there were not enough coffins to smuggle them out. Not all of them. She needed a new plan.