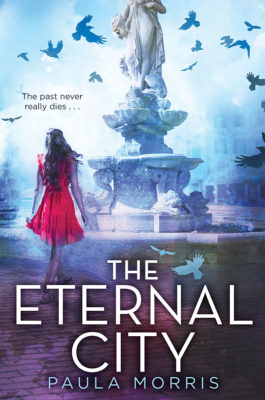 Laura Martin is visiting Rome on a class trip, and she's entranced by the majestic Colosseum, the Trevi Fountain, the Pantheon . . . Everything in this city seems magical.

That is, until the magic seems to turn very dark.

Suddenly, statues of Cupid and ancient works of art come to life before her eyes. Earthquakes rumble and a cloud of ash forms in the sky. A dark-eyed boy with wings on his heels appears and gives her a message. Laura soon realizes she is at the center of a brewing battle -- a battle between the gods and goddesses, one that will shake modern-day Rome to its core.

Only she and her group of friends can truly unravel the mystery behind what is happening. As tensions mount and secret identities are revealed, Laura must rely on her own inner strength to face up to what may be a fight for her life.

Acclaimed author Paula Morris brings the ancient world to vivid life in this unstoppable tale of friendship, love, and the power of the past.

Paula Morris is the author of RUINED, DARK SOULS, UNBROKEN, and several award-winning novels for adults in her native New Zealand. She now lives in England with her husband. Please visit her online at www.paula-morris.com.

The boy stepped out of the funnel of water and over the low-slung rope, so close that Laura could have touched him. With a shiver of recognition she took in his gray-and-black clothes, the crow-clothes of the boy she''d seen prone and bleeding on the cemetery''s grassy verge.
This was a different boy, though. He had different features -- was better-looking than the crow-boy she''d seen yesterday. He glanced at her -- his eyes were black -- and there seemed, she thought, to be recognition there. He didn''t smile at her, this pale-faced boy, but when there was something calm and knowing about his gaze. Laura may have been open-mouthed, but he didn''t look surprised at all.
Or wet. His clothes were as dry as hers -- drier, probably, as hers were still drying from the scramble across the piazza. He strode towards the huge main door without attracting any attention at all. Laura looked wildly from side to side: Really, had nobody else seen him fall through the upside-down fountain and land right here?
But everyone around her was still pointing, talking, taking pictures, texting, just as they had been before.
Laura backed away from the rope and forged an awkward path through the crowd, hurrying to follow the boy. If he was real, if this wasn''t some apparition, then she needed to know. How she''d find out, she wasn''t sure -- tap him on the shoulder, perhaps? She had to be quick, because he was almost at the door.
Someone lumbering sideways, hulking a tripod and camera, bumped into her and Laura stumbled. She didn''t dare stick a hand out to break her fall' - ! ' she''d done enough damage to her hands today. So she half-slithered onto one knee, wincing as bone made contact with marble.
And from here, low on the ground, the crowd surging around her, Laura saw something she hadn''t noticed before.
There on the back of the boy''s feet were tiny wings, black feathers on his heels. Something Laura had seen in paintings and on statues, but never in person.
Mercury, she tried to say, but nothing came out of her mouth but a bleat.'