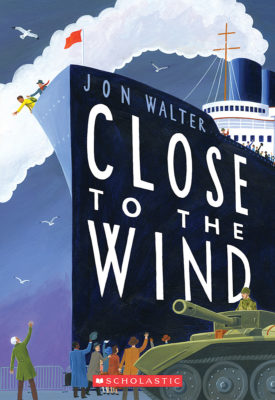 Close to the Wind

A simple, resonant, and heart-shattering debut for younger fans of Between Shades of Gray. A timely story about greed, love, trust and what matters most when your world falls apart.

Ten-year-old Malik's world is falling apart. Soldiers have invaded town, and his mother is missing, leaving Malik with his grandfather, Papa. Along with a thousand other refugees, their hope for escape to a new life lies in gaining passage aboard one ship--but the demand for tickets is high, and so is the cost. Can they make it on? And will they find Mama before the ship departs? When things don't go as planned, Malik must summon all of his courage and resourcefulness to survive.

A heart-wrenching and suspenseful story of sacrifice and resilience, Close to the Wind confronts the realities of war in a timeless and accessible way.
Jon Walter

Jon Walter is a former photojournalist with a special interest in social welfare issues. His debut middle grade novel, Close to the Wind, was chosen as The Sunday Times Children's Book of the Week in the United Kingdom and an Indie Next List pick in the United States. My Name is Not Friday is his young adult debut and has earned five starred reviews. He lives in East Sussex, England, with his family.

The boy and the old man arrived at the port at night.
There had been cloud in the sky but now the moon shone brightly and they stood in the shadow cast by a row of terraced cottages that lined a cobbled street, polished through the years by wheels and feet and the hooves of horses.
The boy held the old man's hand.
The air smelled of motor oil and charred timber. At the far end of the street, the quayside was lit by a bright white lamp that glared upon the skeleton of a single black crane, its hook hanging solemn above the cottage roofs, and above the crane loomed the tall ship, a string of yellow bulbs along the rails of its upper decks as though it might be Christmas and not a warm autumn night.
The boy sneezed loudly.
'Shhh, Malik,' hissed his grandfather.
Malik let go of his grandfather's hand and pinched his nose through the white cotton handkerchief that covered his face – his grandfather had tied it across his nose and mouth to protect him from smoke. Malik could have removed the cloth, since they were a long way from the fires, but he kept it, believing it made him look older. He held his breath so that he wouldn't sneeze again. When he was certain, he took his hand away. 'Sorry, Papa.'
Papa settled a hand on Malik's shoulder. 'No. I'm sorry. I didn't mean to bite.' He glanced back down the road behind them. 'I'm still nervous. I'm sure there's no one here, but we ought to be careful.'