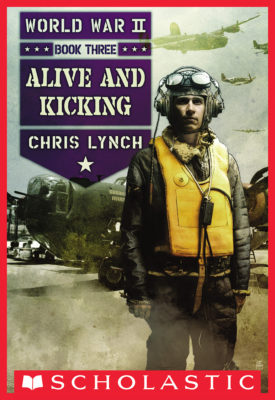 "All the sizzle, chaos, noise and scariness of war is clay in the hands of ace storyteller Lynch." -- Kirkus Reviews

Theo has always looked up to his older brother, Hank, but never more so than the day Hank enlisted in the US Navy. Not to be outdone, Theo followed his older brother's lead in joining the war effort -- but preferring the wide open sky to the untamed ocean, Theo chose to serve with the Army Air Force.

As a gunner on a B-24 Liberator, Theo is enthusiastic about his crew's mission to save all of Europe from the Nazis. Fearlessness is a requirement for dog fights at 50,000 feet. But when Theo's brother goes missing in the Pacific, fear start creeping in. Can Theo keep his head in the game while he awaits word of his brother's fate?
Chris Lynch

\tAll in one devilish, magical moment, the sky opens wide up before us like there was never any cloud littering this sky today. And the air all around fills with enemy fighter planes, Messerschmitt 109s, Fokker-Wulf 190s, coming right for us. There is a trio of them, scorching so directly toward the very tip of the nose of this plane you could swear they had it out for me personally.

\tMy entire body feels it as the Browning .50s pound the air and the Luftwaffe fighters with more fury than I could ever ask for. Two of the three fighters peel off left and right, as the third keeps bearing down like he's intending to come through the window. He's firing away exactly as I am and I hear several large rounds ping and zang of the fuselage before I score in bunches, getting a bead on the underside of his left wing and riddling it as he banks straight up over my head. The engineer's position behind our pilot has its own gun turret and he picks the guy up as I concentrate on the next flurry coming on."