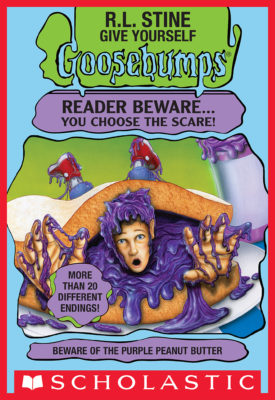 Give Yourself Goosebumps: Beware of the Purple Peanut Butter

Your aunt and uncle told you to stay out of their basement. So, of course, you check it out. That's where you find the dusty old refrigerator.

In the fridge there are two containers. One is filled with purple goop. It smells just like a peanut-butter-and-jelly sandwich. The other holds a piece of chocolate cake. Your stomach is growling. If you eat the purple goop, you start shrinking. Pretty soon you're battling it out with a gigantic monster--a mouse! If you choose the cake, you grow into a tall giant. Now you're trying to escape from the police who are convinced you're a mutant alien!\ The choice is yours in this scary GOOSEBUMPS adventure that's packed with over 20 super-spooky endings!