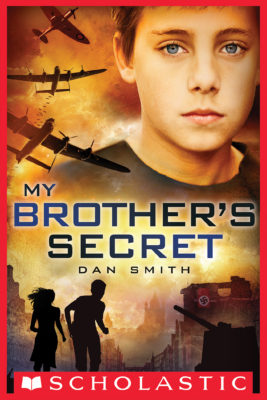 Karl Friedman is only twelve, but like all boys his age in Germany, he's already playing war games, training to join the Hitler Youth. Stefan, Karl's nonconformist older brother, wants nothing to do with it. Then their father is killed, and what had been a game suddenly becomes deadly serious. Karl's faith in the Fuhrer is shaken: Is Hitler a national hero--or a villain? What is the meaning of the flower symbol stitched inside Stefan's jacket, and what is the mission of the shadow group he belongs to? Karl soon finds out as he joins his brother in a dangerous rebellion against the burgeoning threat of Nazism.
Dan Smith

Stefan's movement had pulled open his jacket, revealing a white flower embroidered on his inside pocket. It was small, perhaps the size of my thumbnail, and the stitching was crude, as if Stefan had done it himself.
At first, I didn't think anything of it, but it was right there, staring me in the face, and the longer I looked at it, the more I became aware of it.
"What's that?"
"Hmm?"
"That flower."
Immediately, Stefan stepped back and drew his jacket closed. "Nothing." He stared at me, eyes glistening, as if he were wondering what to tell me. When he spoke again, there was a defensive edge to his voice. "It's nothing," he said. "You didn't see it."
"What do you mean? I don't . . ."
"Just forget it." Then his face softened and he closed his eyes. He sighed, letting his breath come out through his nose in one long whoosh. When he opened his eyes again, he said, "Really - ! ' it''s nothing. It''s just a flower."'