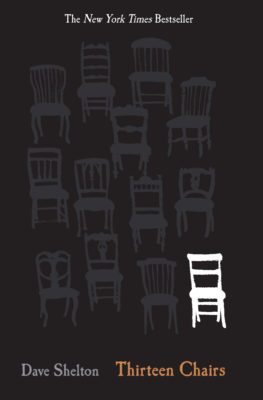 When a boy finds himself drawn into an empty house one cold night, he enters a room in which twelve unusual-looking people sit around a table. And the thirteenth chair is pulled out for him.

One by one, each of those assembled tells their own
ghost story: tales of doom and death; of ghostly creatures and malevolent spirits; of revenge and reward. It is only at the end of the night that the boy starts to understand what story he must tell . . .
Dave Shelton

Dave Shelton is the author of Thirteen Chairs. His UK debut novel for children, A Boy And A Bear In A Boat, was shortlisted for numerous awards in the UK and won the Branford Boase Award --- an award given to an outstanding children's or young adult novel by a first-time writer. He's also the creator of the UK comic strip "Good Dog, Bad Dog." He lives in Cambridge, England, with his family.

Jack stands in the dark on the landing of the old house, and looks at his feet. He is outside the last of three doors, the one that is underlined with flickering light. He doesn't move. He stares down at the twin crescents of light reflecting on the toes of his shoes. He looks at the thin highlights along the edges of the bare floorboards and at the pattern of the grain in the wood in the pale puddle of light that leaks under the door. He has been here for minutes, his hand on the door handle, debating whether or not to go in. Common sense insists that he must not, because there is no way of knowing what might be inside. But curiosity insists the opposite, for the same reason.
And Jack is a curious boy.