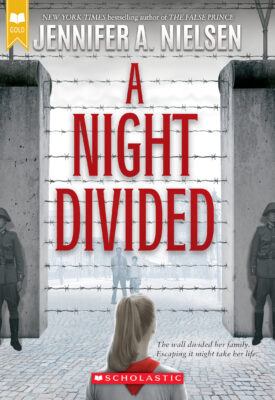 With the rise of the Berlin Wall, Gerta finds her family suddenly divided. She, her mother, and her brother Fritz live on the eastern side, controlled by the Soviets. Her father and middle brother, who had gone west in search of work, cannot return home. Gerta knows it is dangerous to watch the wall, yet she can't help herself. She sees the East German soldiers with their guns trained on their own citizens; she, her family, her neighbors and friends are prisoners in their own city.

But one day on her way to school, Gerta spots her father on a viewing platform on the western side, pantomiming a peculiar dance. Gerta concludes that her father wants her and Fritz to tunnel beneath the wall, out of East Berlin. However, if they are caught, the consequences will be deadly. No one can be trusted. Will Gerta and her family find their way to freedom?
Jennifer A. Nielsen

It was still very early in the morning, and large bulldozers could be heard, already tearing down homes or hundred-year-old trees that were in the way of the fence. Along with most of the people in my neighborhood, I stood on the road, facing the guns that faced us. Mama held one of my hands and Fritz held the other. No one around me cried, and not even the strongest men fought back.

Why didn't we? I looked around, waiting for someone to rush at the officers in a cry for freedom. Then others would join in and fight until we overpowered the guards and showed them we refused to be held in here like criminals.

Or until enough of us were shot. The guards looked prepared to do that, if necessary.

Probably everyone here already understood that, because like me, they only stood and watched. Maybe we were all too empty for tears, and too horrified for words. \t

When I asked Fritz when Papa and Dominic would be able to come home, he only knelt beside me and shook his head. Quietly, he whispered, \"Papa was a part of the resistance, Gerta, or they think he was. As long as that fence is up, they will never let him come home, and he won't send Dominic back to this place. But don't worry, I'm sure it can't last long.\"

The sun warmed my back as it slowly rose in the east, and I shivered against it. This early morning light had not ended the long, dark night. No.

For us, the dark night had only begun."