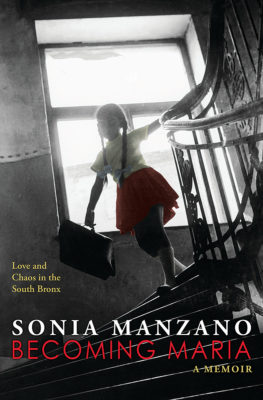 Set in the 1950s in the Bronx, this is the story of a girl with a dream. Emmy award-winning actress and writer Sonia Manzano plunges us into the daily lives of a Latino family that is loving--and troubled. This is Sonia's own story rendered with an unforgettable narrative power. When readers meet young Sonia, she is a child living amidst the squalor of a boisterous home that is filled with noisy relatives and nosy neighbors. Each day she is glued to the TV screen that blots out the painful realities of her existence and also illuminates the possibilities that lie ahead. But--click!--when the TV goes off, Sonia is taken back to real-life--the cramped, colorful world of her neighborhood and an alcoholic father. But it is Sonia's dream of becoming an actress that keeps her afloat among the turbulence of her life and times. Spiced with culture, heartache, and humor, this memoir paints a lasting portrait of a girl's resilience as she grows up to become an inspiration to millions.
Sonia Manzano

Sonia Manzano has affected the lives of millions since the early 1970s, as the actress who defined the role of "Maria" on the acclaimed television series Sesame Street. Sonia has won fifteen Emmy Awards for her television writing and is the recipient of a Lifetime Achievement Award from the Academy of Arts and Sciences. People magazine named Sonia one of America's most influential Hispanics. She lives in New York City.