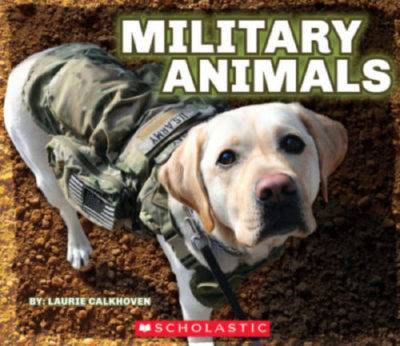 Everyone knows that soldiers entered battlefields on horseback, but did you know that some warriors rode elephants into combat? You may have heard of bomb-sniffing dogs, but what about bomb-sniffing honeybees?

In MILITARY ANIMALS, you will learn all about these incredible animals that have aided the military in the air, on land, and by sea. Discover how dolphins, bears, pigs, penguins, and even glowworms became heroes in times of war. When technology couldn't help, these amazing animals could! MILITARY ANIMALS showcases these true, hard-to-believe heroic animal stories, accompanied by awesome, action-packed photos.

Each book even comes with a collectible paw-print dog tag necklace!
Laurie Calkhoven