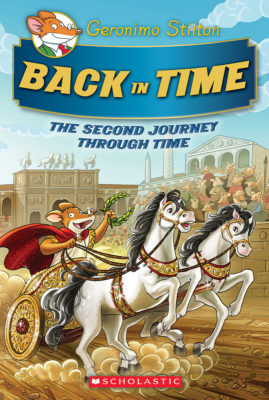 Geronimo Stilton Special Edition: The Journey Through Time #2: Back in Time

Imagine my surprise when I, Geronimo Stilton, was offered the chance to travel back in time again! Professor Paws von Volt entrusted me to lead my family on a secret journey in his new time machine.

This voyage took us to ancient Rome, to the great Maya Empire, and to the Palace of Versailles during the age of the Sun King! Along the way I competed in a scary chariot race, saved some mouselings from a hungry jaguar, and was forced to organize a huge party for the king who had everything. What a wild trip through history!
Geronimo Stilton