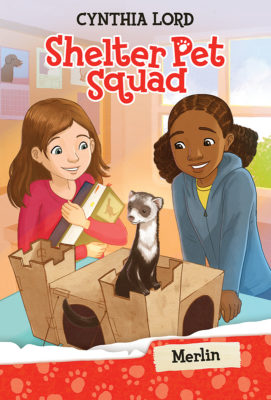 A pet is missing!

When Suzannah arrives to volunteer at the shelter, one of the animals is missing! It's Merlin, a mischievous ferret who gets into everything, and loves to play hide and seek.

Owning a ferret can be really hard work, the Shelter Pet Squad discovers. Whoever takes Merlin home will need to be prepared. That's why Suzannah and the other kids make up a test to give to anyone who wants to adopt him. But the ferret is full of surprises . . . and even the Shelter Pet Squad has a lot to learn.

Erin McGuire is an illustrator currently working in Dallas, Texas. She's illustrated over fifty books across a range of middle grade and picture book projects, including Time of the Fireflies, The Real Boy, and many more.

--- - ! "Most Saturday mornings when I arrive at the Maplewood Animal Shelter to volunteer, things are calm and peaceful. Ms. Flores is behind the front counter, answering the phone and telling visitors about the animals. Ms. Kim and the rest of the Shelter Pet Squad kids are in the workroom, ready to make things to keep the animals busy and happy.
\tBut not today! When I opened the front door, Ms. Flores was crawling on the floor, looking under the waiting-room chairs. Ms. Kim was searching through the dog-bed display.
\t\"Quick, Suzannah! Close the door!\" Ms. Flores said. \"We can't let Merlin escape!\"
\tShe looked worried. I shut the door behind me as fast as I could. \"Who's Merlin?\" I asked. A hamster? A rabbit? A cat?
\t\"A ferret!\" Ms. Kim pulled the dog beds away from the wall and looked behind them. \"His owner brought him to us a few days ago. This morning, he got out of his cage, and now we can't find him anywhere!\"
\tThe shelter takes care of stray and homeless pets until they get a new home. Ms. Kim and Ms. Flores work at the shelter, and there are five kids in Shelter Pet Squad: Jada, Matt, Levi, Allie, and me. My best friend in the group is Jada. My least favorite kid is Allie, because she likes to get her own way every time. \"Merlin isn't in the cat room,\" Levi said, coming down the hallway with Matt. \"We looked everywhere! Even under the cats' beds.\"
\t\"What if one of the cats ate him?\" Matt asked.
\t\"Don't say that!\" I heard Jada yell from the small-animal room.
\t\"A cat wouldn't eat a ferret,\" Ms. Flores said. \"But Merlin can get himself into places you wouldn't expect. Yesterday afternoon, I found him sleeping in the trash can near my desk.\"
\t\"Good thing you didn't throw him away!\" I peeked under a rack of books about pet care. I wasn't sure a ferret could even fit under there, though. I'd never seen a real ferret, only ferrets in pictures.
\tUnder the books was just some dust – no animals.
\tAllie popped up from behind the front counter. \"He's not in the trash can or the recycling bin.\"
\t\"What does Merlin look like?” I asked, looking through a rack of leashes and collars.
“Like a weasel, but with a raccoon face.\" Matt made sideways Vs with his fingers around his eyes, like a mask. \"A weaselly thief!\"
\t\"You can say that again,\" Ms. Kim said. \"On Thursday, I let him run around the waiting room so he could have some exercise. My coat was hanging on the back of my chair, and he stole my phone out of the pocket!\"
\t\"Maybe he wanted to call for pizza!\" Jada said.
\t\"Or he was calling his old owner to say 'Come back!'\" Levi said.
Levi's comment made me sad. I don't like to think about people giving up animals, when I wish I could have one of my own. But we live in an apartment, and the landlord says \"No pets.\"
\tMom says that maybe someday we'll have our own house. Then we can have a real dog or cat or maybe even a ferret! But for now, the only pets I can have at home are toy stuffed animals. Bentley the dog and Whiskers the mouse are my favorites. I reached into my pocket to touch Whiskers's nose. I like to keep him with me, but he's a secret. None of the other kids bring stuffed animals with them.
\t\"Hey!\" Matt said, peering under the bookshelf. \"Look at this!\"
We all rushed over. \"Did you find him?\" Allie asked.
\t\"No. I found a quarter!\"
\tWe sighed.
\t\"Ferrets can climb,\" Ms. Flores said. \"So we need to look up, too.\"
\tI looked around, down, and up. Where would a ferret go? Maybe behind the bags of dog food on the donation shelf? As I walked over to check, I stopped to pat Shadow, one of the waiting-room cats, asleep in a chair. In the chair next to him, someone had left a coat draped over the back. A purse was hanging on the chair arm.
\tThe coat didn't look lumpy, but I patted it down just in case. It was all squishy. Nothing was hiding there. Then, the purse moved.
\tA car horn started blaring from the parking lot: BEEP, BEEP, BEEP!
\tMatt ran to the window. \"Ms. Kim, that's your car!\"
\tBEEP, BEEP, BEEP!
\tUsually, I wouldn't touch a purse that wasn't mine, but a purse can't move on its own. I lifted the purse's front flap.
\tI saw two little white ears.
\tA pink nose poked out.
\tA tan face appeared, with a mask of dark-brown fur surrounding shiny, black eyes. And a mouth was clutching the remote for a set of car keys.
\t\"I found him!\" I said."