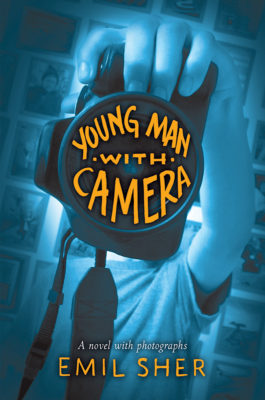 T-- is used to getting grief. He gets it from his mom, who blames herself for his accident years earlier. He gets it from Mr. Lam, who suspects every kid of stealing from his shop. Worst of all, he gets it from Joined at the Hip, a trio of bullies so vicious that they leave T-- terrified of even using his entire name.

But T-- has his own strength too: his camera, which captures the unique way he sees the world. His pictures connect him to Ms. Karamath, the kind librarian at school; his friend Sean, whose passion for mysteries is matched only by his love for his dog; and especially Lucy, a homeless woman who shares his admiration for the photographer Diane Arbus. When Lucy is attacked by Joined at the Hip, T-- documents the assault on film. But the bullies know he has the photographs, and their anger could be deadly. What's the right thing for T-- to do? Do pictures ever tell the whole truth? And what if the truth isn't always the right answer?
Emil Sher

Emil Sher taught at a high school in rural Botswana before returning to Montreal to pursue creative writing. While his plays have been widely produced in schools, YOUNG MAN WITH CAMERA will be his first novel. He currently lives in Toronto with his family.

--- - ! "Wanna take another picture?
\tI shook my head and kept walking.
\tWant me to take yours?
\tI stopped.
\tLemme take your picture.
\tI've taken thousands of pictures of other people. This was the first time someone had asked to take a picture of me.
\tWhy? I asked.
\tLucy started to laugh. This wasn't bow-and-arrow laughter where I'm the target. This wasn't nail-and-hammer laughter where I'm the plank. This wasn't the sour laughter I'd heard before. This laughter was thick gravy you pour over platefuls of grief to disguise the taste.
\tShe looked at me with her gray-teeth grin and said, Why not?"