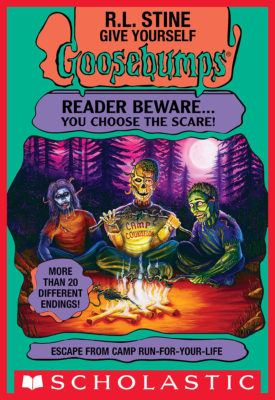 Escape from Camp Run-For-Your-Life (Give Yourself Goosebumps #19)

Heads up! You're on your way to sports camp! If only Uncle Ed can find the place. He's the lamest driver ever.
A sign up ahead says CAMP RUNNING LEAF. Hey! That's not the name of the camp you signed up for! But Uncle Ed is already driving away. Oh, well. Running Leaf is a sports camp too. Isn't that why the campers call it Camp Run-For-Your-Life?

You've got a choice of events. If you enter the athletic competition called the "Selection," you could be selected for a free trip... to be a slave on Plant Xentron! Yikes. Maybe you'd better choose the wilderness hike instead. Just look out for that mountain lion over there! Oh and try to steer clear of the Zombies with rotting limbs...