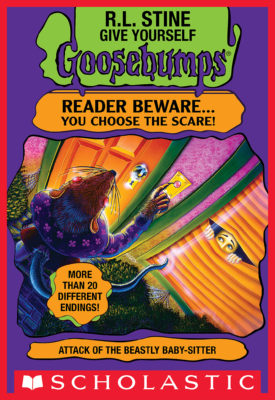 Attack of the Beastly Babysitter (Give Yourself Goosebumps #18)

Rats! You're too old for a baby-sitter. But your mom hired one anyway. And that's the good news. The bad news is the baby-sitter works for a company called KidScare.

So what do you do? If you like to play games, meet Dare. He knows some killer games -- but if you lose, you'll never go home again. Forget about playing nice!

Or maybe you'd rather go to the Fun Zone. Look out! Will you drown in the Bottomless Ball Pit? Will you find your way out of the Tomb of the Unknown Rat? Just one bit of advice: Whatever you do, don't eat any of that stuff marked "Switch Cheese"!