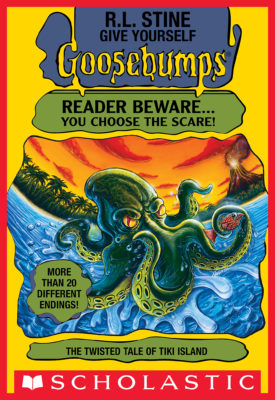 The Twisted Tale of Tiki Island (Give Yourself Goosebumps #21)

You and your cousin Gina are vacationing on Tiki Island. It's so beautiful, you don't even care when you hear a rumor that people have been mysteriously disappearing from the island.

While you're snorkeling, Gina finds a dark undersea cave. Should you follow her in? Or go after that gleaming object on the ocean floor? Quick! Make up your mind! A shark is zooming straight at you! If you choose to dive for the object, you'll find a Tiki Eye. It has the power to erupt a volcano - and summon Tiki warriors from the dead! If you explore the underwater cave you'll find a sunken ship filled with treasure... and some very active skeletons.