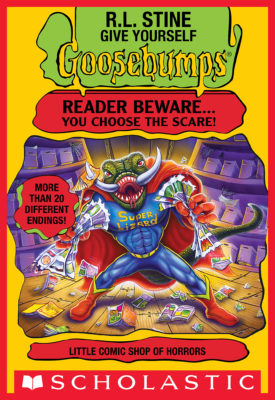 Little Comic Shop of Horrors (Give Yourself Goosebumps #17)

You're walking through a creepy part of town when you find a new comic shop--Milos Comics Dungeon. Dungeon is right. The place is dusty, dingy, and really dark. You can see the comics are awesome. But there's something you can't see. Trouble. It's waiting--for you.

If you choose to go downstairs watch out for Milo the Mutant. He's got big, bad plans for you. What? You say you'd rather stay upstairs? Not such a great idea--unless you want to battle the worst villains in the history of comics! Do you have what it takes to be a superhero?