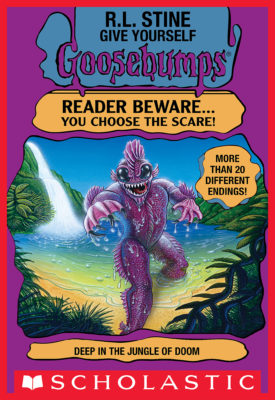 Deep in the Jungle of Doom (Give Yourself Goosebumps #11)

You're headed to a South American jungle with your nature-study class. Everything seems pretty cool at first, but then you start to get bored. Where's the beach? Where's the excitement?

So you and your friend decide to do a little exploring on your own. That's when you see something so freaky, all you want to do is get out of there! If you run screaming down one trail you'll end up at a waterfall with a creepy underground cave. If you choose the other trail you'll eat some fruit that turns you into a crazy-looking sea monster. Will you get back to normal before things start to get really fish?!!