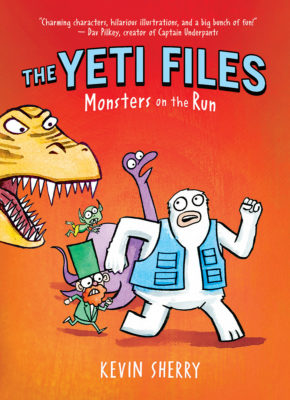 Monsters on the Run (The Yeti Files #2)

Everyone thinks the Loch Ness monster is one-of-a-kind. But that just means Nessie's lonely. And only yeti Blizz Richards and his team of cryptozoologists can help her find a friend just like her. With a little help from a time-traveling leprechaun, the gang travels back 65 million years to the age of dinosaurs to begin the search.

But they aren't ready for the dangers that wait for them: monstrously mean dinos. Giants with razor-sharp teeth. Terrifyingly cute little kitties. Can Blizz keep his team safe, or will they have to sacrifice everything to help Nessie find a friend?
Kevin Sherry