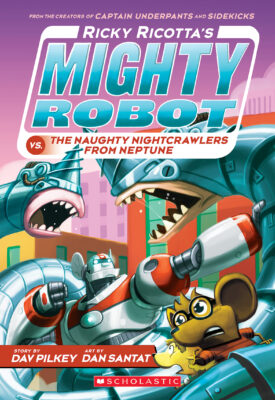 Ricky Ricotta and his Mighty Robot are in for a sticky, slimy surprise!

Ricky and his Mighty Robot have built the coolest fort Squeakyville has ever seen, and they can't wait for the fun to begin! But then Cousin Lucy arrives with her pets and plans to turn it into a princess castle -- what a party pooper!

Things completely fall apart when Nimrod Nightcrawler, a wicked worm from the planet Neptune, digs a tunnel under Ricky's fort, trapping the Mighty Robot. Now it's up to Ricky and Lucy to put a stop to this nightmare -- and save their friend!

--- - ! 'From RICKY RICOTTA''S MIGHTY ROBOT VS. THE NAUGHTY NIGHTCRAWLERS FROM NEPTUNE

Ricky Ricotta and his Mighty Robot sat on the front steps of their house. They were bored.

"We are going shopping," said Ricky''s mother. "I don''t want you boys making a mess while we are gone!"

"Every time you jump in a mud puddle, you make a big mess," said Ricky''s mother.

"And every time you climb a tree, you make a big mess!" said Ricky''s mother.

"And every time you chew bubble gum, you make a big mess!" said Ricky''s mother.

"Yes," said Ricky''s father. "You can use tree branches or cardboard boxes or even old pieces of metal and wood to make a fort!"

"Great!" said Ricky''s father. "Just remember, you must clean up after yourselves when you are done playing."