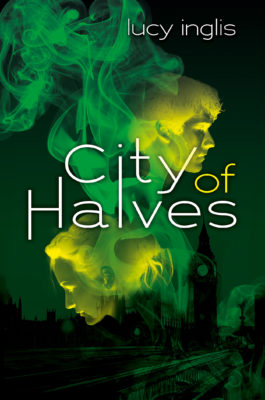 London. Present day. Girls are disappearing. And strange things are roaming the streets.

When sixteen-year-old Lily is attacked by a two-headed dog, she's saved by hot, tattooed, and not-quite-human Regan. As Guardian of the Gates, it's his job to protect both halves of the City--new and old--from restless creatures that threaten its very existence. But an influx of these mythological beasts has Regan worried that something terrible--and immense--is about to happen.

The missing girls may have something to do with the monsters wandering around London, but what do they have in common? Can Lily and Regan find the girls and discover the truth in time to save London from being torn apart?
Lucy Inglis

Lucy Inglis is a historian of the eighteenth century and curator of the award-winning Georgian London blog. She lives in the shadow of St. Paul's Cathedral in London with her husband and their border terrier. You can visit her online at www.lucyinglis.com.

--- - ! "From City of Halves:
A tall, dark-haired boy in worn jeans and a faded red Henley appeared in front of her. He was eerily beautiful, with crow-black hair and pale skin. He crouched on his heels and pushed up his sleeves, looking at her, head tilted. Lily could feel the blood pumping from her wounds, dripping over her chest, down her ribs, soaking into the waistband of her jeans.
\t\"Please, you need to get help,\" she managed, her hand scrabbling for the engraved silver medical alert disc at her neck. It was gone, lost in the fray. \"My blood, I need . . .\" She couldn't finish.
He took the collar of her jacket between two fingertips, moving it aside. \"I think it's too late for that.\"
Everything went black."