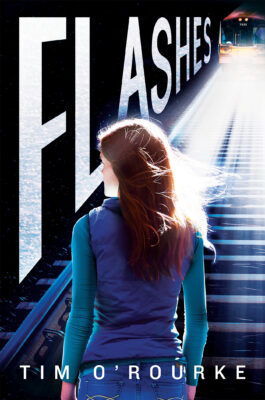 Flashes of things she can't explain. A girl in trouble. The sound of trains. She feels certain they are clues to a crime. But no one will believe her. Until she meets Tom, a young policeman on his first case: an accidental death on the railway tracks, not far from where Charley lives. Was it an accident, suicide . . . or murder?

The attraction between Charley and Tom is instant, but can they work together to find out what really happened on the tracks before it happens again?
Tim O'Rourke

Tim O'Rourke was a serving police officer for fifteen years, but now writes full time. Flashes is his debut young adult novel. Tim lives in England with his wife and three sons. You can visit him at www.kierahudson.com.

Flashes! That's what I call them. I'm Charley Shepard, the girl who can see things, the seventeen-year-old with an overactive imagination, the freak who can see lights like a thousand photographers crammed inside her head snapping away all at once!
\tWith one hand clasped to the side of my head, I staggered into the bathroom. If anyone had been looking, I wouldn't have blamed them for thinking I was trying to hold my head together-like it might just explode at any moment.
\tIt was agony, like my brain was being rubbed against a cheese grater. I leaned over the sink. Bile burned the back of my throat. Then, as if slapped, my head rocked backward and my neck made a cracking sound.
\t\"Let go of me!\" I heard the voice say. \"Please, I just want to go home!\""