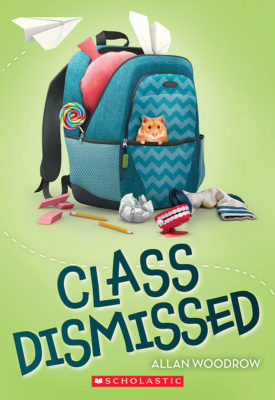 Class 507 is the worst class Ms. Bryce has ever taught. And she would know -- she's been teaching forever. They are so terrible that when a science experiment goes disastrously wrong (again), Ms. Bryce has had it and quits in the middle of the lesson. But through a mix-up, the school office never finds out.
Which means ... Class 507 is teacher-free!
The class figures if they don't tell anyone, it'll be one big holiday. Kyle and his friends can play games all day. Samantha decides she'll read magazines and give everyone (much needed) fashion advice. Adam can doodle everywhere without getting in trouble. Eric will be able to write stories with no one bothering him. And Maggie ... well, as the smartest kid in the class she has an ambitious plan for this epic opportunity.
But can Class 507 keep the principal, the rest of the students, and their parents from finding out ... or will the greatest school year ever turn into the worst disaster in school history?
Allan Woodrow

Allan Woodrow is the author of Unschooled, Class Dismissed, and The Pet War, as well as other books for young readers, written under secret names. His writing also appears in the Scholastic anthology Lucky Dog: Twelve Tales of Rescued Dogs.
Allan currently lives near Chicago with his family. For more about Allan and his books, visit him online at www.allanwoodrow.com.

--- - Ms. Bryce is so busy watching Adam march out of the room and toward the principal's office that she doesn't notice what has happened. She steps backward, into the red fake-volcano muck.
She notices it now.
She looks down. Her shoes are half buried in red glop. Ms. Bryce opens her mouth and a scream like a siren screeches out, so loud and shrill that I think it might shatter the windows. I have to cover my ears. I wouldn't be surprised if people could hear her from across the school.
I wouldn't be surprised if people could hear her from across the state.
"What did you do?" she cries. She raises her eyebrows and the deep wrinkles in her forehead crease even deeper.
"I just poured in the vinegar," replies Giovanna in an almost-whisper.
Ms. Bryce jabs her finger at the empty jar. "I said to put in a quarter of a cup!"
I'm about to point out that no, she didn't say that. She didn't say anything about vinegar measurement. But I keep quiet because I don't want to get in any more trouble than I might be getting into already. Ms. Bryce's face is tomato red, or rather, fake-lava red. If this were a cartoon, she'd have little clouds of smoke puffing from her ears.
"That's it!" our teacher yells. She marches to the front of the class, red glop dripping from her sensible but fashion-poor footwear. She picks up the phone. For a moment, I worry that she's calling the police to arrest us for ruining her shoes, and I wonder how I can explain to my parents that I need them to bail me out of prison. But she presses the button for the school office instead, which makes no sense. After a few seconds of waiting, she hollers, "This is Ms. Bryce. Tell Principal Klein that I am resigning. Effective immediately!" She hangs up.
Then, she grabs her coat from behind her chair, marches across the room, and leaves, slamming the door behind her.