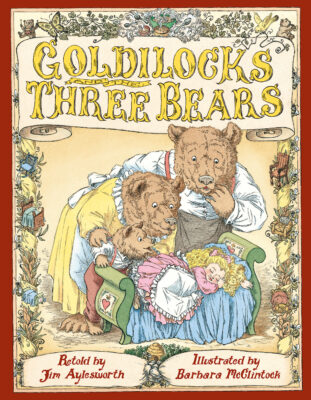 Goldilocks And The Three Bears

"Once upon a time, there lived a little girl named Goldilocks, who was very, very good, except that sometimes she forgot to do things that her mother told her to do. Yes she did... "
But worse is when she forget's not to do what she is told not to do. For sometimes that can lead to much more serious trouble....like what happened the day of this story. McClintock's art, that is reminscent of 19th Century children's book art, perfectly compliments Aylesworth's playful, original, and very involving rendition of the classic Three Bears story.

Jim Aylesworth tells his stories with generous doses of "out loud" sounds, rhythms, and rhymes. His twenty-five-year teaching career taught him exactly what children love best in a story. He lives in Chicago, Illinois, with his wife.

Barbara McClintock has written and/or illustrated over 40 distinguished books for children. Emma and Julia Love Ballet which she wrote and illustrated, received three starred reviews, and My Grandfather's Coat, retold by Jim Aylesworth, also received three starred reviews and was named a Sydney Taylor Honor Book. Her books have five times been named New York Times Best Illustrated Children's Books. She has received a Boston Globe-Horn Book Honor, as well as a myriad of other awards and honors. Barbara lives in Connecticut with her family and their four very graceful cats.