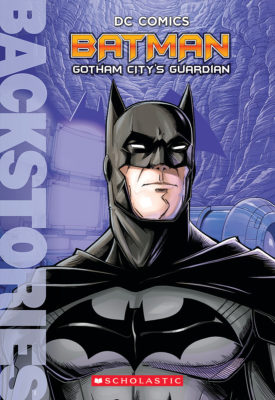 What was Bruce Wayne's childhood like? Why does he dress up like a bat? What compels him to protect Gotham City? How did he become the world's greatest detective? Who are his most trusted allies and fearsome foes? In this biography--complete with black-and-white illustrations, timelines, and fact boxes--young readers will delight in learning the complete history of Gotham's fearless protector.
Steven E. Gordon

Matthew K. Manning is the author of over fifty books and dozens of comic books. Over the course of his career, he has written books starring Batman, Superman, Spider-Man, Wolverine, the Joker, Scooby-Doo, Iron Man, Wonder Woman, Flash, Thor, Green Lantern, Captain America, the Hulk, Harley Quinn, and the Avengers. Currently the writer for the IDW/DC Comics crossover series Batman/TMNT Adventures, Manning has also written for several other comic book titles, including serving as one of the regular writers for Beware the Batman, The Batman Strikes!, Legion of Super-Heroes in the 31st Century, Teenage Mutant Ninja Turtles: New Animated Adventures, and Teenage Mutant Ninja Turtles: Amazing Adventures.

Visit him online at www.matthewkmanning.com