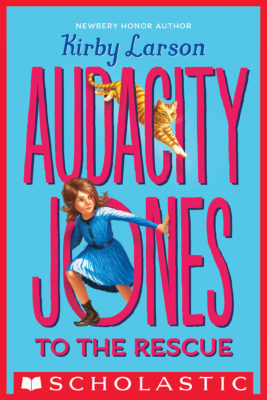 Audacity Jones is an eleven-year-old orphan who aches for adventure, a challenge to break up the monotony of her life at Miss Maisie's School for Wayward Girls. Life as a wayward girl isn't so bad; Audie has the best of friends, a clever cat companion, and plenty of books to read. Still, she longs for some excitement, like the characters in the novels she so loves encounter.

So when the mysterious Commodore Crutchfield visits the school and whisks Audie off to Washington, DC, she knows she's in for the journey of a lifetime. But soon, it becomes clear that the Commodore has unsavory plans for Audie -- plans that involve the president of the United States and a sinister kidnapping plot. Before she knows it, Audie winds up in the White House kitchens, where she's determined to stop the Commodore dead in his tracks. Can Audie save the day before it's too late?
Kirby Larson

"I suppose you know why you are here?" The bird woman squawked the question.
Audie glanced at the Commodore. She didn't want to answer incorrectly.
"I thought it best to keep her in the dark." The Commodore shifted on his chair.
After a brief pause, the woman nodded. "Yes, of course. The less she knows --" she let the thought hang in the air, unfinished.
Audie's imagination couldn't help but finish. The less she knows, the safer she is? Is that what was implied? Audie swiped damp palms on her new wool coat, inhaling deeply to steady her nerves.
"We have an exceedingly important job to do. Tomorrow. At the White House." The woman stared down her beak at Audie, her hot gaze warming Audie right through to her backbone.
The White House! That silly game she'd played with Beatrice hadn't been too far off the mark after all. The White House. What would the Wayward Girls say to that? Audie sat a little taller, shoulders back, pride puffing out her chest. Think of it! An orphan like her, coming to the aid of the president of the United States.
"It's an honor." Audie couldn't help but wonder what sort of assistance the president might require of her. Though there could not be another man in America with more on his mind than poor President Taft, it would hardly do for Audie to offer him a bedtime song such as those she had sung to soothe the triplets. She struggled to imagine what other help a president could demand of an orphan. Nothing came to mind. But nevertheless. The president needed her. And she was not about to let him down. By the time her thoughts cycled through all the possibilities, she was so full of patriotic fervor and passion she nearly saluted Miss Beaknose. "I'll do whatever you need."
The woman nodded curtly. "We haven't much time. Listen closely."