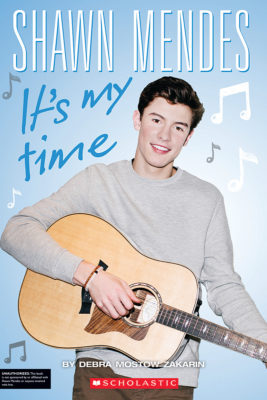 Shawn Mendes: It's My Time

Shawn Mendes is a 16-year-old Canadian singer who gained a following starting on Vine. And he may have gotten his start as an online celebrity, but now he's a bona fide pop sensation! He first album, Handwritten, is already at the top of the charts in both the US and Canada. He's won the Teen Choice Award for "Choice Web Star: Music," and he's the opening act for Taylor Swift's 1989 World Tour. Shawn has millions of followers, on- and off-line, and he's making new fans every day. Learn all about this up-and-coming star in this book full of color photos and fun facts!
Debra Mostow Zakarin

Debra Mostow Zakarin loves to write. In fact, she has written over 100 books. Debra lives in Los Angeles, California with her husband, two kids, and dog named Blue.